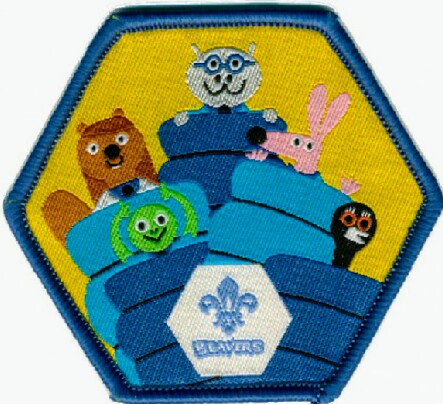 So last weekend I went to Beaver camp! My adventure started on Friday evening when according to my Mum I spent far too long packing for one night away.  Does she not remember the key rule – there’s no such thing as bad weather only bad kit! Well as the weather forecast was a mixture,  I wanted to ‘Be Prepared’.

Saturday morning arrived and I headed to where we would be camping and helped unpack the bacon (mmm yummy).

The Beavers arrived as we were setting up their huge tents, all prepared for their jungle camp.

First up was splitting the Beavers into their lodges each with their own young leader. My lodge’s first activity was putting up a tent, followed by archery and then fire lighting. They got a stamp for each activity they completed filling out their jungle passports.

After a ‘short’ break filling up everyone’s water bottles we did some more activities. My lodge did a blind folded maze, followed be creating the word Damboree using natural letters (Damboree is the Beavers version of a Jamboree) and then completed an endangered animal activity.  By this point it was time for dinner.

Dinner consisted of the Scout camp classic “Spaghetti Bolognese”. Whilst I refuelled on caffeine the Beavers played some indoor games as it was too wet outside for their campfire as some of the Beavers missed the memo about there’s no such thing as bad weather only bad kit.

They then sat round the small campfire and sang some classic songs. After this, they were read a bedtime story and got ready for bed.

The Beavers were specifically told to not wake the leaders up in the early hours of the morning or to stay up late all night talking. However, they didn’t listen to us. They stayed up till way past midnight and woke me up at 5:30 in the morning. This was officially the shortest amount of sleep I had ever had on any Scouting camp – even less than my very first Jamboree camp.

Whilst waiting for the Beavers to be quiet we could see lightning lighting up the sky.

The next morning I packed my kit and tent up and ate the breakfast I was waiting for since the beginning of the camp, bacon.

They first did some backwards cooking by toasting marshmallows. As I was on putting the marshmallows on sticks duty once the Beavers had all had a s’mores one Beaver told me that I had to make one for Bat (one of the leaders). They then told me (after I had already made myself one) that I could have one so I replied saying that I was going to have one anyway.

The activities for that morning included animal mask making and knot tying. They completed both these activities and then went on to tracking where we set up tracks (made with sticks) around the field with the Beavers having to look for them.

After a busy morning it was time for the jungle banquet. The Beavers selected an array of jungle themed food with pudding savoured last. The pudding (might I say so myself) was the best. We had animal cupcakes with slime, twigs and dead flies.

Once lunch was finished, we returned any lost property to the Beavers and then it was time to go home…

… But not for me, I still had to take down the beavers tents and wash up in the kitchen.