So this weekend I had the amazing opportunity to help collect money and fundraise at the famous Bridgwater Guy Fawkes Carnival.  If you haven’t heard about this carnival before it’s one of the largest illuminated processions in Europe, with a history going back hundreds of years.

After heading south down the M5 we arrived and unpacked at a small remote Somerset Scout hut which I would be staying in overnight.

After braving the park and ride we arrived in the bustling town centre. We saw a steel band, a samba band and an amazing giant bubble display. It started to get busy and knowing we needed food before joining the procession we wandered of towards the start, grabbing a hotdog along the way. 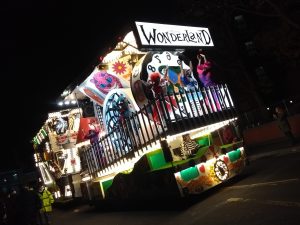 Walking around the corner to where everyone was lining up we were blinded by all the lit up carts, dazzled at how many lights each one contained.   These were amazing – some of the larger ones were made of several long sections and had obviously taken a lot of work and time to create.  In amongst these were smaller entries from around the country.

We found ourselves a gap to join in by one of the smaller entries and waited  for it to set off.  As we moved along I got the chance to collect change from some of the thousands and thousands of people lining the route. It was incredible being a part of it and seeing all the faces light up at the sights.

It took several hours to complete the route and once we’d done so I had a chance to see the rest of the procession as it also reached the end, but there was more to come. 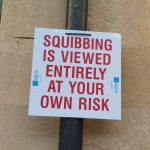 The procession is followed by the squibbing.  This funny sounding thing is where one of the streets was filled with 200 people each holding a long stick with a holder for gunpowder and when they were lit there was a fountain of sparks showering down the street. Bridgwater is one of only a few places in England to still take part in this spectacular tradition. 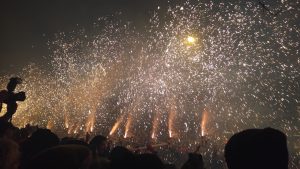 We started the next day with a traditional full English breakfast cooked in the scout hut, before heading off to start counting the money.

We arrived to a room already full of people and tables covered in small change.  Before we arrived our individual collection buckets had been emptied into a single large bucket that was brought over to us.  We were surprised at how large the pile of coins was when it was tipped out onto our table and then astounded when they told us there was a second bucket!  We had no idea we had collected so much. 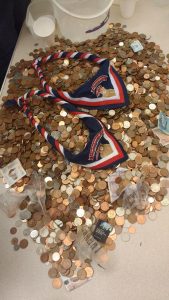 Then came the task of sorting and counting it all.  Fortunately we didn’t have to count all the copper coins (over 5,000 of them) or the 5p’s as once we’d sorted them we had some scales and could split them into bags of about £20 each  – when they double checked our weights none of our bags were more than 10p out!

We still had to stack and count all the other coins  (along with a few notes, a screw, a chip, a packet of salt, some fairground tokens and a flyer for a gym!) . We spent several hours sorting, stacking and counting coins – almost as long as the parade had taken the night before.

It felt good to get it totalled up and back on the road home again.  I still can’t believe what a great experience it was, and so different taking part rather than just watching. I hadn’t really thought about what happens to all the coins that get collected at these events so I have a lot more respect for the people that do this sort of thing .

I can’t wait to do it again next year.