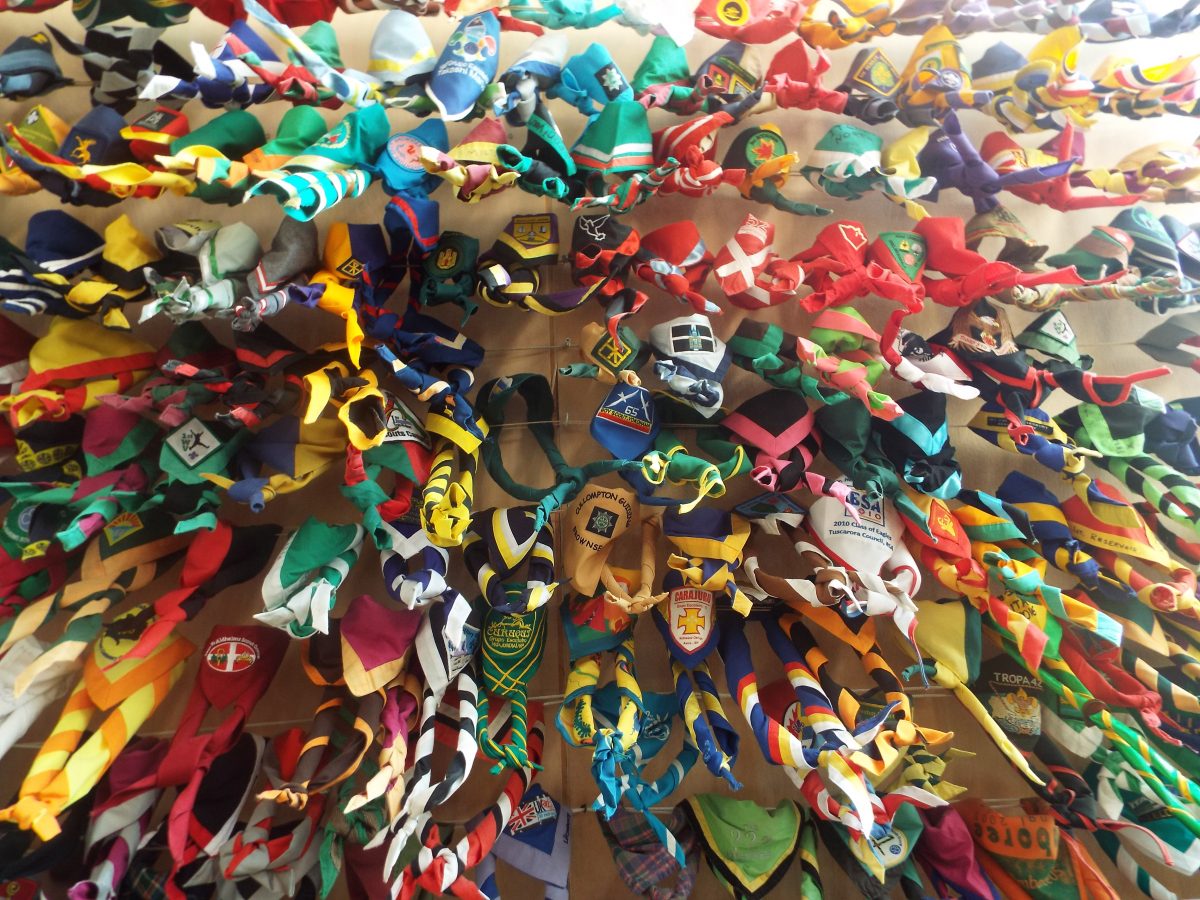 Before the Jamboree, I set myself the challenge of visiting  Brownsea Island. I achieved this last week when I visited my grandparents on holiday.

I arrived in Poole Harbour with enough time to catch the 11 o’clock ferry. In less than 20 minutes I arrived to my destination and, as if I was landing on the moon, I took one step for man off of the ferry and took one giant leap for mankind explorerscout84sblogskind.

I found the Scout Stone engraved with the words, “This Stone Commemorates the experimental Camp of 20 boys held on this site from 1st-9th of August 1907 by Robert Baden-Powell later Lord Baden-Powell of Gilwell Founder of the Scout and Guide Movement”. Olivia (the Rainbow from my Mum’s Rainbow Unit) and I took photos with the Scout Stone.

While at the Scout Stone, a group of Cubs came along waiting to have a group photo with it. I spoke to the leaders and told them who I was and what I would be doing – going to the Jamboree of course. I showed them my UK contingent necker which they were very envious of and I persuaded them to buy some of my badges. Who knew I would manage to do some fundraising whilst on holiday! I learnt that the group were camping on the island for their summer camp which I am very envious of.

Being a dedicated badge collector, I had to visit the Trading Post. Inside there were Neckers ‘floating’ from the ceiling and badges were displayed from all across the world. A pin the map was covered with pins – this is where you use a drawing pin to pin the location you have travelled from. They had a UK map and a World map where there were pins covering every county and most countries.

I brought a necker, some badges and a woggle to commemorate my journey and spotted the Brownsea Island Units badges for sale – unfortunately I already had these. However, I learnt that the different colours outline of these badges represent the 4 different patrols.

I donated one of my unit badges to the shop and they were very grateful for it. They have many displays of badges including those from previous Jamborees.

After my visit to the trading post, I also spoke to a Scout from Wales who was also camping on the island – I’m still envious of them too. They asked whether I would be willing to trade neckers with them, unfortunately I had to say no. I had only brought my Unit necker and UK contingent necker with me, which I would only receive one of.

Being in the National Trust site, allowed nature to live peacefully. I saw many different species of animals, however I did not get to see the rare red squirrels which live on the island. I saw peacocks which did not have there tails up, peahens and peachicks (which are baby peacocks or peahens – depending on their gender). I learnt that even baby peachicks have feathers on their foreheads as well as the peacocks and peahens.

On the way back to Poole, we thought that our ferry would go straight back to Poole harbour until we found out that we were on a tour around Poole harbour. I learnt that one of the islands is used as an oil farm and the oil gets transported back to the mainland via pipes underground. Another one of the islands held a £9 million house and in Sandbanks the houses are worth over £6 million.

After our detour, we arrived back into Poole Harbour. We went back into the harbour and we headed back to my grandparents house.

Whilst I was on the island I talked to many different people – some ex members of Scouting, members of the public and Scout groups – sharing with them all about my Jamboree experience.

I’ve read that at the Summit Bechtel Reserve there is also a Brownsea Island – I’m looking forward to seeing that one too!