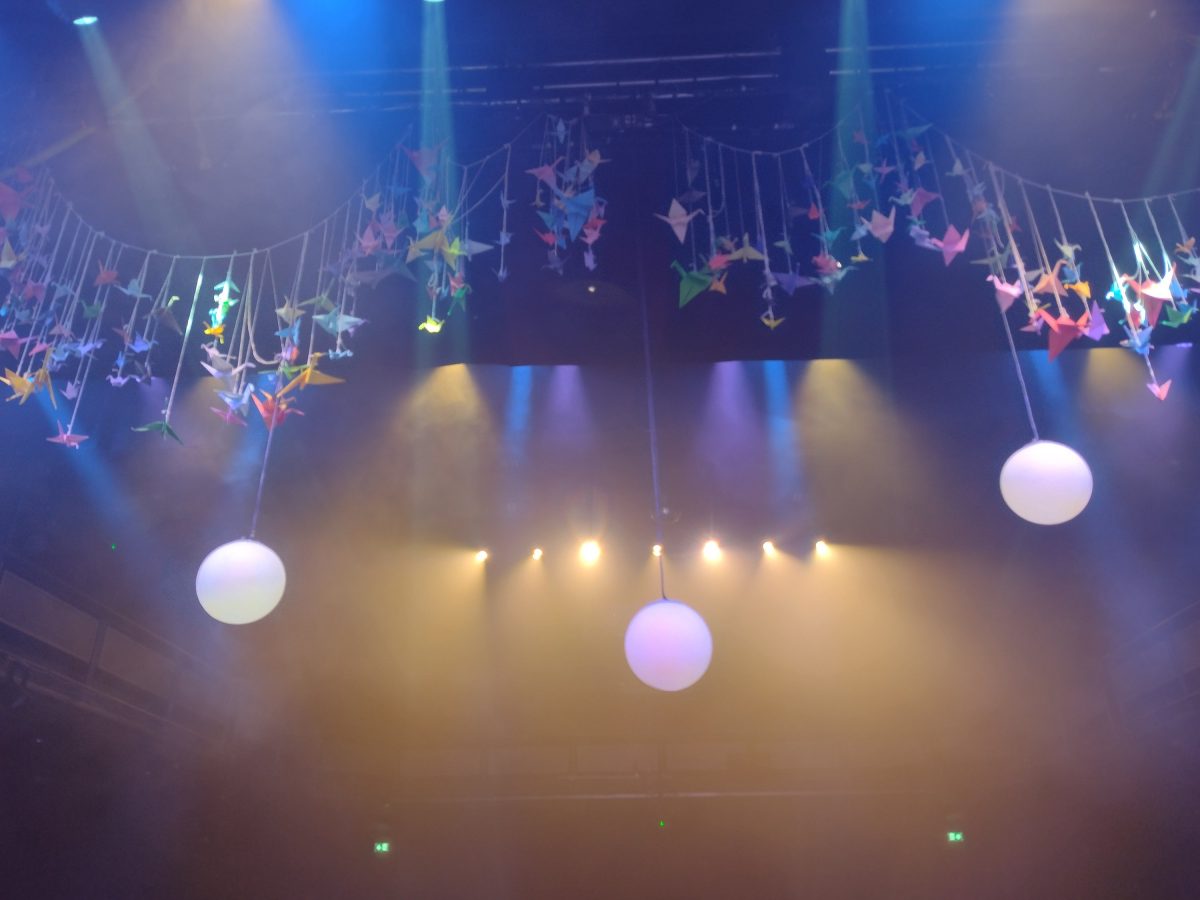 A few weeks ago, I helped out with my districts gangshow. The following is what I got up to over the week helping as a member of the backstage crew.

On the Friday, I helped with the get in process. This required moving all the scenery from the districts hall into a lorry which would then be driven to the theatre. We had lots of Timbits to keep us motivated before then driving to the theatre to unload. I then helped the scenery crew completing some laminating (to make smiley awards) as well as tying lots of paper cranes onto string. At the end of the day, I had blisters after tying over 300 knots!!

On the Saturday, I helped to tie the previous paper cranes with string onto another piece of string in order for them to hang in rows on the stage. I then started helping on the stage where I found out my role was to move backstage staging and scenery – whilst also checking the staging was secure with tight clamps. We went through all the sets to check there positions with the producer and chair of the show, and when we were given the all clear, we marked the position of the set with tape. When setting hanging scenery, I got to help screw some wire rope clamps onto the metal wire which would be hung from the bars via. a carabiner: we had to make sure that this set hung evenly and was not wonky. At lunchtime, we had Chilli for helping out all day.

Over the Sunday and Monday, it was dress rehearsals with the cast. I became an honorary curtain puller, due to the designated curtain puller being unavailable. Luckily, I only went wrong once during the two rehearsals. On top of this, I helped to move set and was given a radio where some funny radio chatter happened.

The Tuesday consisted of a crew only rehearsal, where the musicians practiced whilst we quickly changed sets to become more efficient. It was a lot more relaxing during the practice and so we could get away with messing about in between.

Wednesday through to Thursday was the full show and it went well without running too far behind. On the Wednesday, I was given my new gangshow red necker which I was very excited for. I missed the Friday due to my university friends coming to visit however, this was when I made my gangshow newspapers gossip columns debut – all for hanging up some of the fallen set backstage in the wings.

Saturday was the longest day of the week but Blue came along for the shows. It consisted of two shows with a dinner break in between. We got free ice cream from the local ice cream factory during the break which was very kind of them. During both shows they were filming and so at the end we had to go on stage for our bow/ wave. The final show was the best show as we hid a pineapple during each singing number – it was a tradition dating back older than me. After the final show we had to have the get out process where we removed all the items, loaded up the lorry and unpacked at the districts scout hut.

Overall, it was a very fun week volunteering and I am already looking forward to next year!